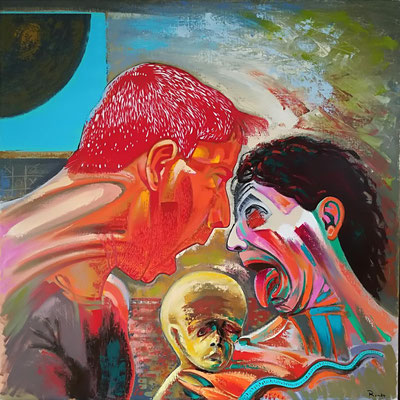 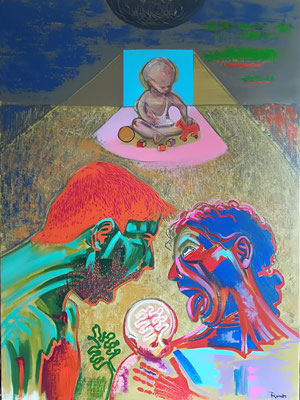 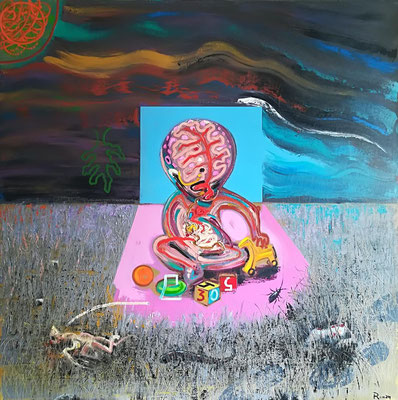 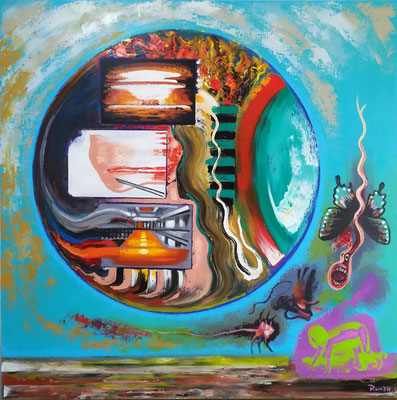 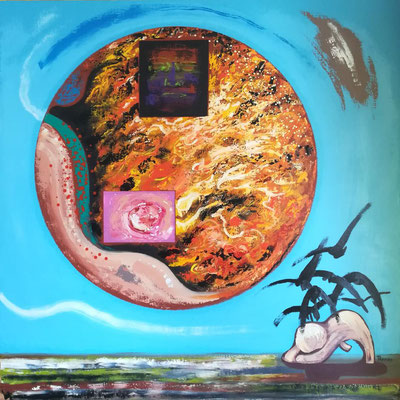 Bachelor Degree in Philosophy, in 2003.

My new series of paintings revolves around the concept of tragic childhood. I must say that I hesitated for a long time to start something like this, because the subject matter is so very personal. Although I would not call my childhood “tragic”, it was certainly not a happy one. Nevertheless, the paintings’ intention is to go beyond any personal past, and to embrace the drama of all children that are ignored or mistreated by irresponsible parents. Starting from this point, I developed a kind of a story about this kid, this boy – my alter ego.

The focus here is the loneliness of the child. Ignored by selfish and inept parents, abandoned in a hostile and incomprehensible world, a helpless victim to strange and cunning people, the child learns everything by himself. He develops an original system of understanding the world, of interpreting the events; he sees and feels differently; he deals with the world in his own terms. Little by little, he becomes stronger and wiser in ways that “normal” people can’t even imagine.

The challenge for me is to create powerful and dramatic images that are not simply violent, or shocking, in an easy, vulgar manner. I want to find elegant, subtle ways of conveying strong feelings. At the same time, I try to combine symbolic and realistic aspects, in order to place the paintings beyond the abstract/figurative dichotomy. Clear compositions with bold colors, complicated compositions with violent colors, expressiveness of the strokes, strange figures, inexplicable flashbacks, recognizable cuts alternated with abstract areas - these are the visual elements that I choose in order to create powerful imagery. 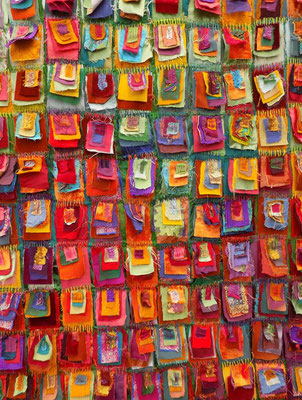 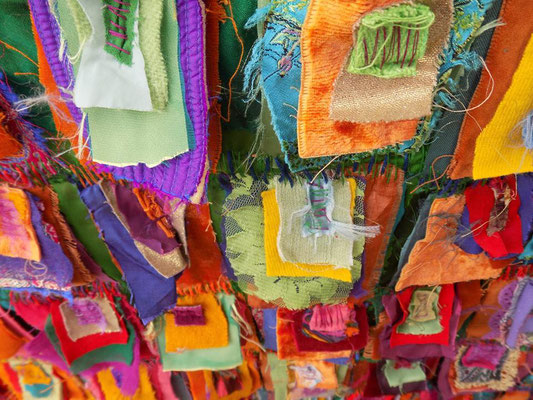 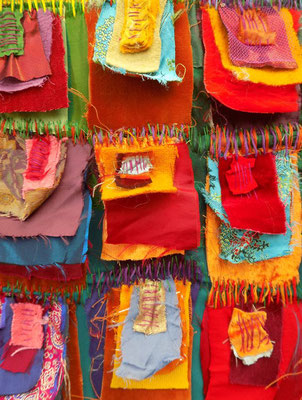 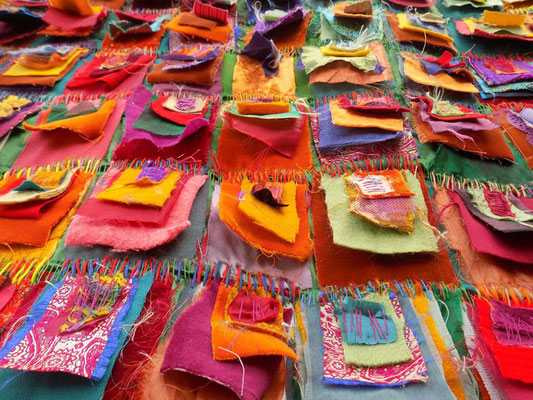 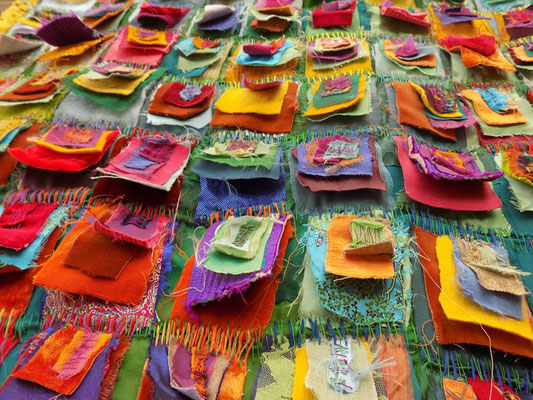 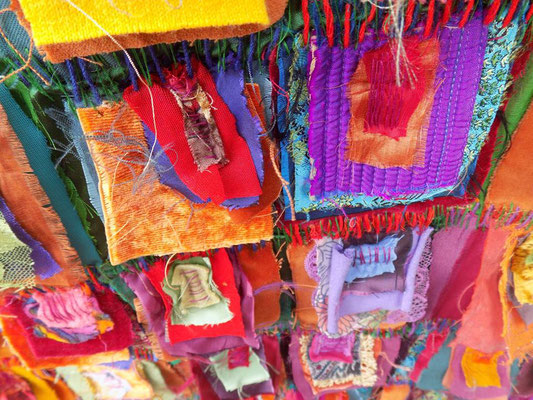 SUMMER SWATCHES: an abstract textile expressing the intense heat of our summers. Created from off cuts of recycled fabrics, layered and hand stitched to form individual colour combinations. Silk threads anchor each swatch to the background, allowing freedom of movement within the depth of the layers.
A hot colour palette of reds, orange, pinks, purple, blues, greens, yellows and gold. A patchwork surround adds to the textural quality with a floral summer print sleeve.
Requires a fixed hanging rail.
Part of the seasonal range in The Natural Collection.
Visit website for full collection of wall hangings and prints created from detailed photographs:

I, Thomas Biedermann, am born on the 15th of November 1968 in Berlin, Tempelhof and I work since 30 years with painting and art. In my family where everybody working in art, like cabaret, singing and dancing in musicals in in a big band.

Since my childhood I was fascinated in Art and I never stopped loving to paint. I sold my first painting when I was 15 years old. Many national and international private and professional art lovers  like until today my paintings, graphics and sculptures.

With my art I do not want to give advises or to tell stories, the viewer should enjoy my art and only if he wants it should making him thinking about.

I use different technic and material like wood, plaster, aluminum, leather. Because of that fact it is not possible to tie on a special style. The idea for my works came out from a moment of the daily sourrounding, from natur and landscape, from buildings or persons.

Because of my parents where peace corps workers I spent 13 years of my childhood at the Middle East, in the african Sahara and in Turkey. The experience and impressions of my childhood shaped and inspired my work.

I spent a decade of my life in Hamburg and learned a trade. Because of the job of mine I relocated to Westfalen. Since 2010 is my fulltime-job in artificial-sience and processing.

I have the target that many art lovers and art interested people can see my work in an expedition. 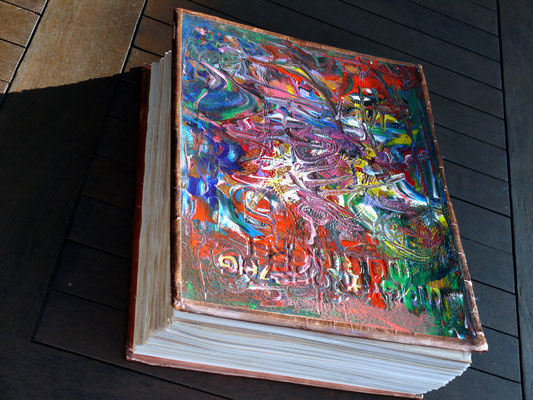 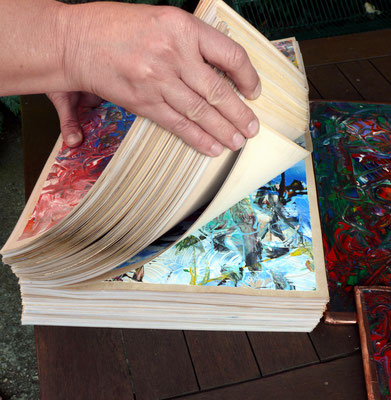 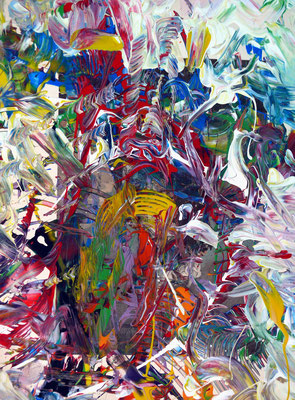 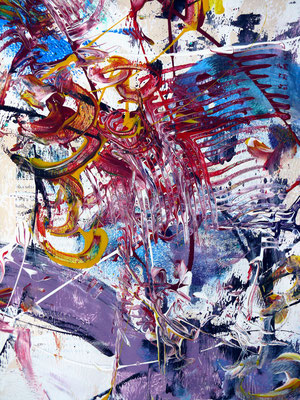 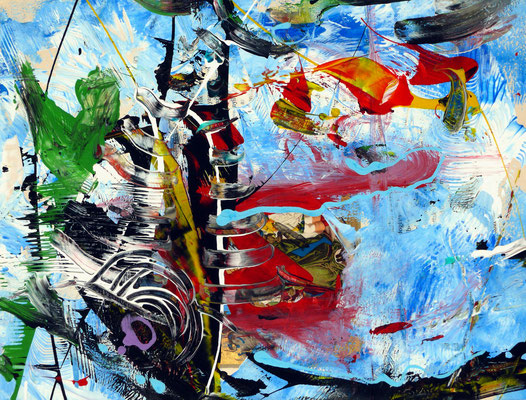 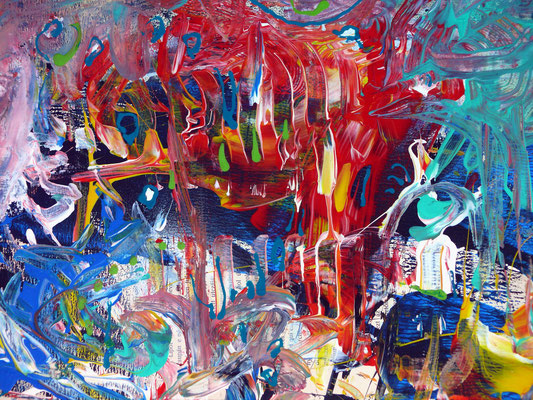 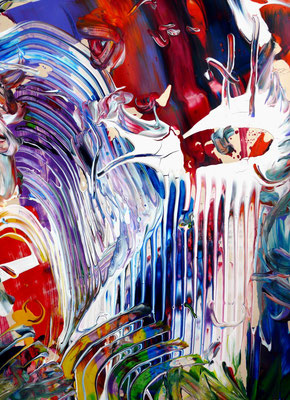 I vividly remember my first encounter with one of Igor Prokop's works. It was about midday when I was attentively walking from painting to painting in the almost empty rooms of one of the London Art Biennale exhibits when I suddenly found myself in front of Igor's huge canvas. It was as if a curtain was lifted and I could truly see: the transfiguration of the everyday world, the exquisite beauty made up of particles of intense light, vivid colours, vibrant lines and forms; fabulous animals moving across the scene, huge precious stones morphing into transparent fruit, an endless unfurling of draperies, green and blue waves breaking with myriads of lights.

For me it was an unforgettable experience.

Again, with the many paintings of Igor's third book “Prokop's Old Diary„ , diving anew into his visions of the beauty and fragility of Nature and our World, I see layers of colours and forms, the opening of new vistas, the variation of transparency and opacity and always this preternatural light and the intense colours recurring in all his works.

Along with this light and colours there goes a recognition of heightened significance manifested by objects and the interspersed mysterious messages from old books.

There are overlays of organic elements such as ribs, muscle strings, parts  of the spine (Igor's father was a physician), of plants such as stems, foliage, or stalks, blossoms or fruit, also parts of animal cadavers as if from a slaughter house or the occupying gesture of a hand.

Phantoms of insects, caterpillars, birds and monstrous animals appear on the picture plane and wonderfully coloured fish are hustling about in the sparkling and gurgling waters. Also spirals or ladders, perhaps symbolizing development or decay, can be seen.

There are filigree elements of the microcosm, illuminated dots, little moons, structures of marble or magical veils juxtaposed to bigger forms reminiscent of historic events or foreign cultures, such as war - or treasure - chests. Mechanical elements are crossing through architectures or landscapes as well, alluding to the rapidity of time.

There is the great beauty of colours, i.e.: blue shades of indigo, cobalt, turquoise, light blue and violet evoking underwater worlds or corridors of heaven, but often interspersed with black and dark red elements reminding of sorrow, death and

The scraps of old book pages with mysterious messages are sometimes presented in a realistic way or dipped in gold, emphasizing the respective character of the prophecy.

In one instance the syllable “gott” can be deciphered. Its significance is left to the interpretation of the viewer.

Inspiration for “Prokop's Old Diary„ was his uncle Gyula's book “Northland Fahren„ , published in Leipzig, Germany circa 1880. It contains his uncle's stories and prophecies about the fate of the world.

Igor transferred these mysterious items into his visual language.

It is his dream that the time will come when people will be able to “...decipher the visual mysteries for the benefit of Nature and World.„

I would wish for people to follow in the footsteps of Igor Prokop and his family (his genealogical tree goes back to old times in history) and become involved in the fight for the rescue of nature and the creation of a better world.

singling him out as a true art genius, one of the few exceptional and transcending painters of our time! 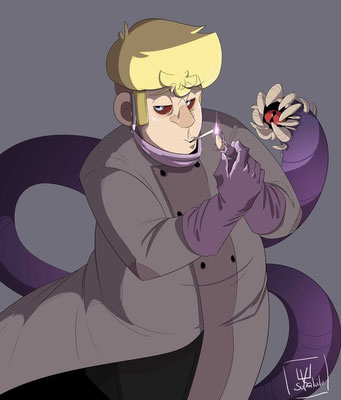 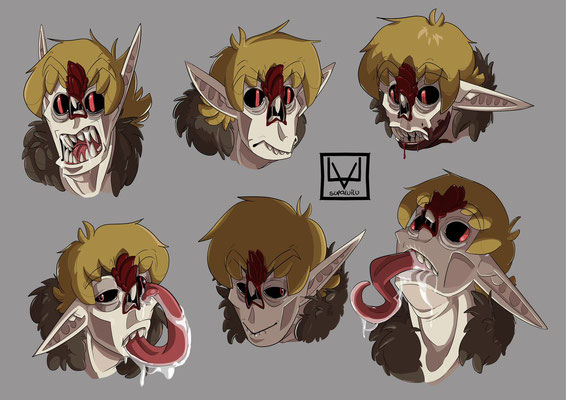 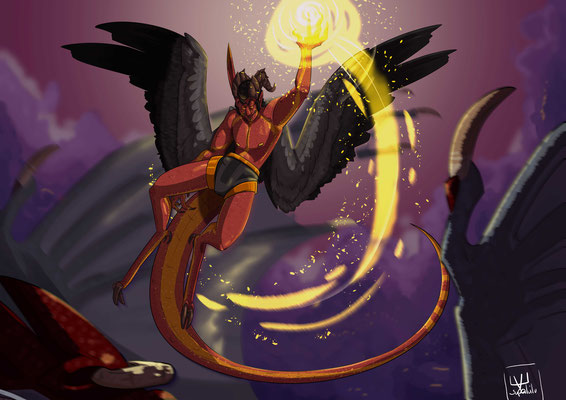 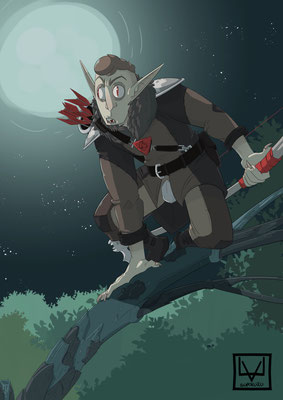 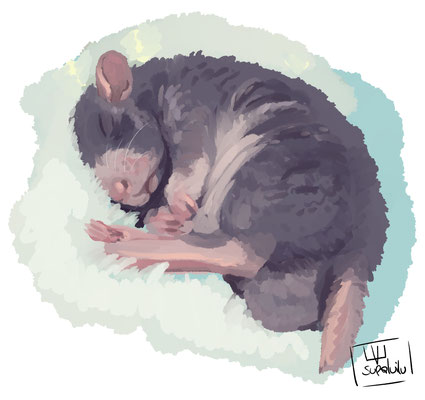 My name is Viktoria Unterrader or you can find me as supaluilu online.

I am a multimedia artist in the field of animation, but mostly I draw cartoons and comics, because it makes me more happy then just multimedia, also I really like to do 2D animations, but I dont have the time at the moment to work on some. I also try to work on my painting skills.

The first time I came into contact with digital art was as I studied multimedia art at Spengergasse. Where I learned myself how to use Photoshop and Easy Paint Tool Sai. As I became less satisfied with Photoshop and Sai I switched to Clip Studio Paint. You may ask why not satisfied with Photoshop? I tell you, because I love to do clean and straight inking lines and without an addon it isnt possible in Photoshop.

I use Clip Studio Paint to draw my baby, my comic “ Stop the Rain ” in it and my characters, which are my main drawing motives.

Many artists have their favourite theme when they draw, mine is dieselpunk and you could say my artstyle looks somehow like the Lowbrow movement; at least a friend told me that.

Stop the Rain should start before christmas and then one page every two weeks. 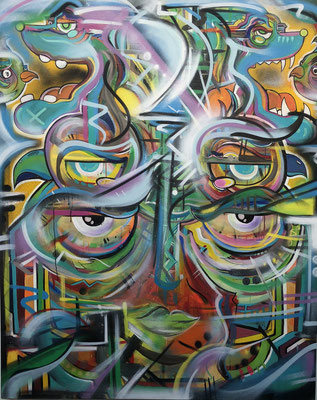 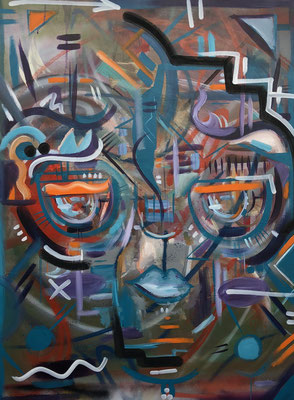 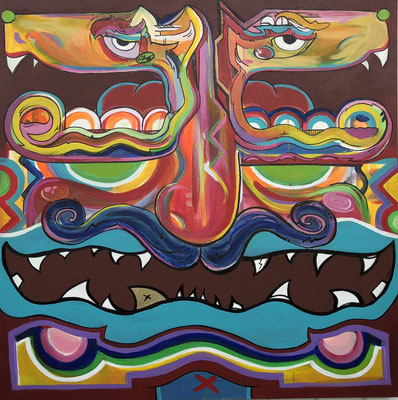 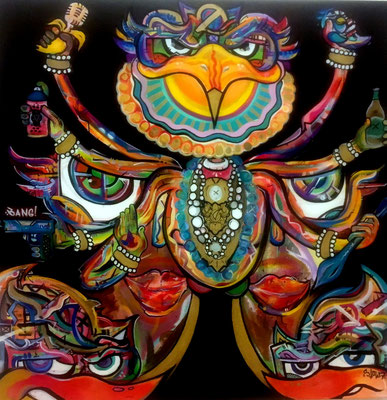 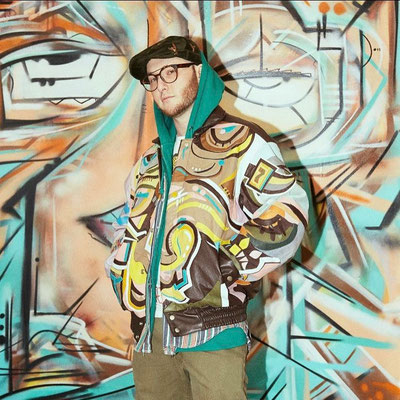 The first thing that comes to mind is the Outsider in the Space Goons, Foo Dogs and Birds rendered by urban artist, Spencer Stown. These characters are different and even shocking, and they epitomize the outsider or stranger who walks into town and gets those wary and suspicious looks...as if others are saying with their silence that you look so different than the average Joe and the rest of us...or you could be the worst plague to ever happen to us. The Space Goons and other characters appear to be peculiar to the spectator at the outset until they engage the viewer and slowly but surely enter the viewer's objective reality and establish firmer ground by implying that we are here to stay.

Stown's characters may be Outsiders who appear to be observers in the contemporary milieu of human interactions. These Outsider beings don’t want to impose themselves on the viewer and obliterate every day existence and life. The Outsider beings simply imply that they are here to stay and perhaps but heads and push headfirst a bit.  These strange looking Outsiders appear in bold color with candor, potency and authentic presence. Stown’s characters also unleash the power of creativity and impact the viewer and objective reality.  There are both bold and subtle gestures of manifold expressions of powerful creativity in the works. The sentience of these Outsider characters may either disrupt or intensify human interrelations, normal human stereotypes and existing paradigms of fear and alarm towards the Outsider.

By far, Stown presents his Space Goons, Foo Dogs and Birds graciously and benignly asking you to accept these Outsiders with the same measure of grace that he has allowed them to enter his paintings and body of work so that they may flourish his artistic vision and alter human interrelations, optics and objective reality for the better.

Stown’s urban style of work infuses retro color schemes with abstract cartoon-like characters, which are rendered and brought to life on canvas. The work is autobiographical with a distinct style, spontaneity and high energy.  His medium is primarily acrylic paint and spray paint. Besides painting on canvas, the artist paints on 3-dimensional objects. In terms of recent development, the artist sews cut up fabrics on to canvas to give volume to his painted canvases.

Stown’s Space Goons, Foo Dogs and Birds have arrived to unleash an extraordinary display of bold color, powerful creativity and Outsider creatures.  These characters challenge the status quo and alter the objective reality as we know it.