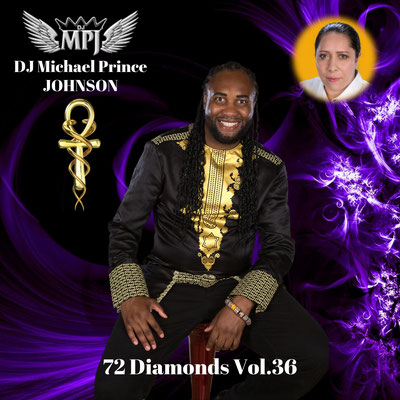 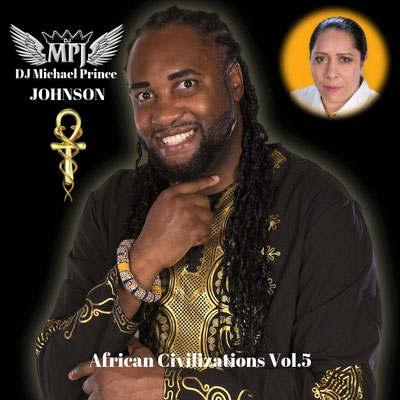 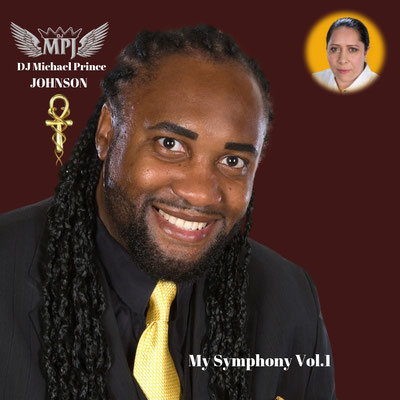 "African Civilizations Are The Oldest In Human History", " Kemet-Egypt Mean Place Of The Black African People (Land Of The Black People) ", "90% Of The Knowledge Today Is Originated From Black Africans", "Stolen Legacy Of Kemet Egypt Greek Philosophy Is Stolen Kemet-Egyptian Philosophy ", "Africans Have More Genetic Variation Than Other Race (DNA Proof)", " Know Yourself Is African Wisdom", "In Ancient Civilizations, They Worship Black Man And Black Women As Black Gods And Black Goddes", " African Belief System Is The Origin Of All Religion" , " You Are Not Nigger, But Origin Of Human Race (DNA Proof)", "Blackness Is Origin Of All Colours", "European And Arab Supremacy (Read About)", " Scientific Racism ( Read About)", My Symphony Vol.1 and list goes on.

Listen, Purchase and Buy The Albums or Singles at  www.michaelprincejohnson.com

Michael Prince Johnson (born November 24, 1983) is an African-American single-handed professional extraordinary prolific and multi-genre recording artist, music producer, composer, arranger, singer-songwriter, and DJ. In addition, independent researcher, historian, and activist. His music has an extraordinarily knowledgeable message, very extremely complicated music topic, and true educational impact. And his music is described simply Music Of Knowledge, Truth, Consciousness, and Conscience. In addition, his music has an influence on popular culture. As DJ he has performed in numerous clubs and events worldwide.

His songs were placed and sampled on CBS, BET (Black Entertainment Television), Starcraft video game, films, and on youtube channels. In addition, some of his songs are licensed to the Sony/The Orchard, EMI Music Publishing, and Warner/Chappell Music.

His songs were supported on national radio station ORF Radio, FM4 and among others. Also his music video for "Say My Name" from the album 2010 " Say My Name Pt 2" get heavy rotation on Austrian music television GO TV.

He has the largest music catalog in Austria. In addition the most sampled musical artist internationally and nationally that comes from Austria. And he is also the best selling recording artist from Austria with African descent.

His music is educating people about the truth of African civilizations, culture, belief system and to make people understand the importance of being united. This is what his songs titles from his notable albums African Civilizations Volumes are about. In addition, his music combines funk, instrumentals, instrumental hip-hop, RnB, soul, jazz, dancefloor, house, blues, club, Afrobeat, reggae, dancehall, hard rock, heavy metal, Film music, Classical music, Classical Crossover music and all types of Electronic Dance Music. The success of his music sales makes him and his bands 72 Diamonds to international superstar status.

In additions, all his albums and songs are available worldwide on his download store or on iTunes, and Amazon. Also over 300 download stores. At the age of 7, he wrote, composed, arranged and sang his own songs. In addition to the DJ set, he plays various instruments such as drum machine, MPC, percussion, and keyboards.

List of his most notable singles: "African Civilizations Are The Oldest In Human History", " Kemet-Egypt Mean Place Of The Black African People (Land Of The Black People) ", "90% Of The Knowledge Today Is Originated From Black Africans", "Stolen Legacy Of Kemet Egypt Greek Philosophy Is Stolen Kemet-Egyptian Philosophy ", "Africans Have More Genetic Variation Than Other Race (DNA Proof)", " Know Yourself Is African Wisdom", "In Ancient Civilizations, They Worship Black Man And Black Women As Black Gods And Black Goddes", " African Belief System Is The Origin Of All Religion" , " You Are Not Nigger, But Origin Of Human Race (DNA Proof)", "Blackness Is Origin Of All Colours", "European And Arab Supremacy (Read About)", " Scientific Racism ( Read About)", My Symphony Vol.1 and list goes on. 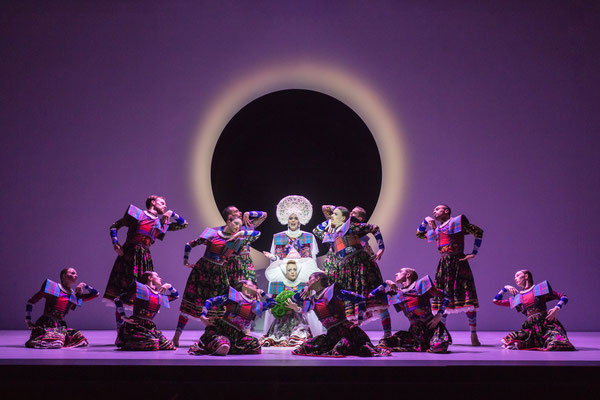 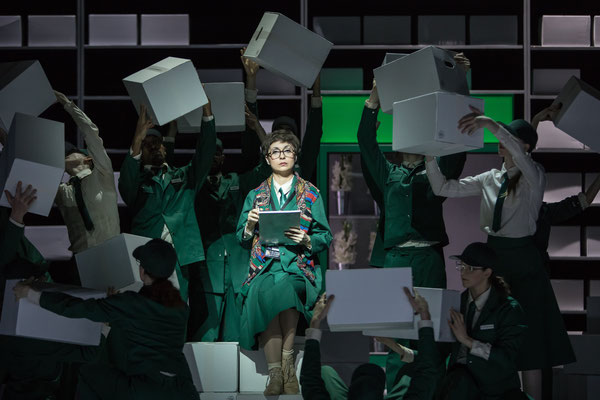 Orfeo ed Euridice"; an opera production at the Lucerne Theatre, which celebrated its premiere on 23 February 2019.

Christoph Willibald Gluck's opera; „Orfeo ed Euridice" has influenced the development of opera more than almost any other opera. Gluck's „azione teatrale" which focuses on the natural, authentic expression of the characters, challenged and, to a certain extent, overcame the traditional „opera seria".

The myth of Orpheus, which founded the form of opera itself and is still one of the most popular themes of musical theatre today, had found a completely new form with Gluck. His processing of the story of Orpheus, who beguiled the gods of the underworld with his singing and brought his beloved Eurydice back to life, is of a hitherto unknown dramatic truthfulness and allows the audience to take a deep interest in the emotional world of the protagonists.

And it is precisely this opera that the artistic director of dance of the Luzerner Theater Kathleen Mc Nurney, made herself a present for her 10th anniversary. An interdisciplinary project in which the dancers together with the three singers and the opera choir of the Lucerne Theatre present the audience with many beautiful and impressive pictures on stage without any particular dominance of a species. And so, you look right at the beginning through a circular hole in the white stage wall and are greeted by numerous hands before you see the picture of Euridice oversized. It is her funeral service, on which folkloristic costumes, however, the lament for the dead and no cloudy black prevails. Together with the dancers the bridge to the afterlife and the connection to the living is skilfully built. The dancers, who intertwine closely and merge in wave-like movements in a harmony that brings to the audience the intimacy of Orfeo and Euridice's love. Choreographer Marcos Morau masters the scene with a virtuoso body language and is supported by Blanca Añón with a picturesque stage design and Silvia Delagneau with the colourful costumes. A part of the resulting harmony is given to the audience with the uniform image of stage, dancers, singers and choir as a matter of course. So the first act goes much too fast.

In the second act Orfeo has to go to the underworld to save his Euridice. At Morau this is a supermarket, even more a logistics centre, which cleanly creates a cold and sterile atmosphere with white parcels. Here, too, everyone wears the same, dancers as choir, but now it's green uniforms that remind us of work clothes or surgical gowns. Again, and again white packages are stacked, piled up, carried around, moved. The mechanical movements, like robots, are pushed over the stage by dancers with angular, lanky movements. Thus, the environment is represented without emotions and emotionally cold, which has such a fascinating effect. But of course, it stands in stark contrast to the lovely music of Gluck. The end is no longer surprising either. In today's underworld, there can be no happy ending. Orfeo turns to Euridice and her lament for love and attention and so, significantly, Euridice dies of frostbite in a large refrigerator with a glass door.

The young conductor of the Lucerne Theatre Alexander Sinan Binder leads the Lucerne Symphony Orchestra with feeling and yet with the precision of a clockwork, so that music, song and dance merge into each other skilfully. Dancers spoil our eyes with very differentiated movements.

With regard to the vocal performances, I would like to quote Urs Mattenberger's convincing criticism: “So this evening alone is musically worthwhile - also because of the female soloists: Guest singer Abigail Levis pushes this Orfeo, when he wants to win back Euridice in the underworld, impulsively, with sometimes excited vibrato, beyond the simplicity ideal of Gluck's music. Ensemble member Diana Schnürpel, who has so far shone primarily as a coloratura soprano, uses Euridice's expressive, warm voice to help create a pathos of suffering that also fits into the distance-creating framework of this production without exaggerating.”  (Urs Mattenberger, Lucerne Newspaper, 24. 02. 2019)

So, all I can do is praise you very highly. Emotions that move and make you think about the here and now and the cold emotions of today's society.

An extremely successful production, which will not only cast a spell over die-hard opera lovers, but will also bridge the gap and take everyone with it and thus sensitively introduce them to opera without overtaxing them.

The premiere audience was enthusiastic, thanked with long-lasting applause and a standing ovation.